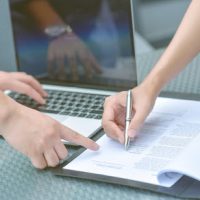 In the event of a divorce or the death of one of the spouses, a prenuptial agreement specifies how property and assets are to be divided. As a legal document, a prenup can be useful in protecting the financial security of other family members and preserving the rights of certain beneficiaries, such as children from previous marriages. While it is meant to help prevent disputes, a prenuptial agreement itself can be the subject of arguments, particularly if it does not meet legal requirements.

With clients who are extremely wealthy or famous, problems with prenuptial agreements can end up making headlines. A recent example involves the estate of the late actor Robin Thicke, whose third wife and his children are involved in a contentious battle, being held both in the courts as well as in the tabloids.

A report earlier in 2017 by the Miami Herald claims that Tanya Callau, a former model who met Thicke in Florida and married him in 2005, is expected to receive several million dollars through a prenuptial agreement in the aftermath of his death, which occurred a year ago in December 2016.  She is now claiming the prenuptial agreement is invalid, for unstated reasons, therefore entitling her to a greater share of his estate. Alan Thicke’s three sons, which includes singer Robin Thicke, have filed a petition asking the court to uphold the agreement, sparking a fierce battle that has been making tabloid headlines.

For questions about creating or challenging a prenuptial agreement, call or contact attorney Vanessa L. Prieto online today. We can arrange a consultation in our Fort Lauderdale office, to help ensure your rights are protected.