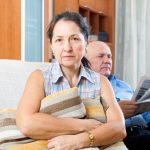 Dealing With Divorce Over 50

Going through the breakup of a marriage is always difficult, regardless of your age or the amount of time you were married. It can be particularly challenging for those over 50, who may have been married for decades and spent a good portion of their adult lives with their spouse by their side. The… Read More »

Caution: Warnings for Older Couples Who Getting Divorced

A recent high-profile West Palm Beach divorce case finally ended recently after a protracted battle that involved an appeal and 11 related, but separate, legal actions. In the case of Zelman v. Zelman, millions of dollars were at stake between Martin Zelman, a 87-year-old Long Island businessman who has slipped into dementia over the… Read More »

Retirement benefits are usually considered during divorce procedures, but they are especially important when divorces occur later in life. When parties choose to dissolve a marriage after the age of 50, retirement plans can be drastically impacted. It is vitally important that you consider all benefits held by you and your spouse, so that… Read More »

Demographers are beginning to notice a sharp spike in “silver divorces,” or divorces among the 50-and-older crowd. According an analysis from the National Center for Family and Marriage Research at Bowling Green State University, the divorce rate within that demographic more than doubled between 1990 and 2010. In 1990, about one in 10 divorces… Read More »